Okay. Lame title. But I'm pretty much UTP@ right now. Of course, I've been UTP@ for like, well, a week or so now.

Yesterday I attended the NAB Convention. NAB = National Association of Broadcasters.
All the big TV, radio, internet dweebs (dweeba, dweeba!) were there. It was very very overstimulating and exhausting and boring. The Ultra Hi-Def presentation was cool. Because, you know, High Def isn't "oh wow!" enough, they had to make it ULTRA Hi Def.
But, anyway. In fifty years, when people are actually able to afford getting Ultra Hi-Def in their homes, that's gonna be some whacked out shit...tizzle. Or something.

On the way back to the station, though, was the cool part of the day. See, behind the Sahara Hotel and Casino, there is a brand new ...thing called "The Drive". It's sponsored by General Motors, and basically consists of two driving courses where people pay money to drive GM vehicles around.
One of the courses is the "precision course" where you can drive sporty-racey type of cars around a curved race track type of course.
The other is the "outdoor course" where you can drive a Hummer H2 or H3 up big old hills and over steep inclines and over logs and through flames and next to hissing cobras.

My supervisor and I were watching them from a distance, and were saying, "That looks like fun. We'll have to check it out sometime." And were going to leave it at that, but as we were leaving, we discovered that until the end of April, it's FREE for locals! Awesome!

So, I got to drive an H2 over some crazy hills, and then I got to speed around in a corvette. All for free. Hee!

It was a lot of fun, and we are thinking about sneaking back down there during lunch on Friday. I highly suggest that any Las Vegans who happen to be reading this (Hi, Miranda!) find a way to get down there before May 1st. (The price for non-locals, and once the special ends, is 10 bucks. That gives you two drives - you can do two of the precision course, two of the outdoor course, or one of each.) Only catches: You must be 18 or older (even to be a passenger, so, yeah, that sucks that the kids can't go with ya), you must have a license, and you have to pass a breathalizer test.

In other news, Take Your Children To Work Day is on Thursday. So, I'm sure I'll have plenty to report on that day. 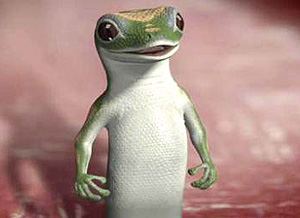 Remember when the Geico Gecko first appeared in commercials? He was pretty much anti-Geico.

He kept getting wrong numbers, people kept expecting him to be able to save them money on car insurance, he was getting audited by the IRS... his life seemed pretty hectic, and all due to the fact that his name was similar to the insurance company's.

And then, somewhere along the line, things changed.

He now works for Geico. He was voted Employee of the Month and was given a company car. He is now synonymous with the company he once so-readily despised.

And in the latest batch of commercials, he's training other lizards to also become corporate shills!! Where does it end? When all the cold-blooded animals on earth work in the insurance field?

"Judge Judy will be on Monday through Friday at 6p, right?"

"That... is where we are putting Dr. Phil. We aren't getting Judge Judy."

"No, we are. It was just announced Friday."

Later, when I checked my supervisor's email (he is out of town this week, returning on Wednesday) I discovered that, yes, we are in fact picking up Judge Judy, and yes, it will most likely be airing at 6pm.

Additionaly, for the past month or so we have known that the Dr. Phil deal was in the works, and were more or less just waiting on the official word for when it would start. Before my supervisor left, he informed me that it would most likely happen while he was gone, with the start date of the 24th.

We had developed a programming schedule for when Dr. Phil starts, and were just waiting on it to be announced before releasing it. Around 4pm today, I got a phone call from one of the salespeople.
"When is Springer moving to 2pm?"
"Whenever we get official word on Dr. Phil starting. Most likely the 24th, but that hasn't been announced yet."
"It was just announced."
"Oh. Well, then, yeah. Springer is moving to 2pm on the 24th."

That's nobody's business but the Turks.

Also, while Blogger is.... adequeate the way that it is, there are a few things I'd like to have changed. If you would too, you can go here and choose among a few features you'd like to see implemented. (I voted for the first option. I really want categories.)

And lastly, remember Ape10?
What would be a good term for that style of webcomic? (Yeah, I know, it barely clarifies as a webcomic either.) So the point remains - what should stories like that - where certain words are links to images - be referred to as?
Or, asked another way, how would you categorize such writings?
Posted by P@ at 7:56 PM 4 comments:

As opposed to Fire Bad.

Today was one of those "why the hell are we here" days at work. Since the rest of the freaking world had the day off, it was slow as hell. I gotta say, I don't know what people in offices did before the internet.

You know what's crazy? I started this entry like two hours ago. And I have no idea what to say now. I believe that is what the Universe likes to call a sign. And that sign says, "You should not be writing at this time."
Posted by P@ at 3:54 PM 1 comment:


Instructions: Go to Wikipedia and look up your birth day (excluding the year). List three events, two births and one death in your journal, including the year.

1954 - U.S. President Dwight D. Eisenhower signs a bill into law that places the words "under God" to the United States' Pledge of Allegiance.

1967 - The People's Republic of China tests its first hydrogen bomb.

Even though it sucks sometimes, life is pretty good.
Posted by P@ at 5:20 PM 2 comments:

Less than 2 months until the end of the world

The world will, most likely, NOT really end on that date. Also unlikely
- that I will finish my Perth story that is supposed to take place at
that time. [sigh]

I might get around to transcribing the basic gist of the story. But,
realistically, that probably won't happen either. Man. I have had this
tale in my head - in various forms - for 8 years now. And in 8 years I
have not actually finished it, nor even really come close.

Make a little birdhouse in your soul

God. You know, I woke up later than normal, and I'm still tired. Fucking work.

We went to the library today. And we left with less than twenty books! That's got to be a record for our family.

Lost is on right now (ending pretty soon, actually) but we wern't home to watch it, so we did the TiVO thing. Except that we still live in the 20th century so our TiVO is actually a VCR. Anyway. The point is that we most likely won't watch it until tomorrow, so don't spoil anything for me, please. (This also means I'll have to avoid the entire internet tomorrow, because the stupid 'net is all spoilerific when it comes to this show.) Oh. And speaking of Lost - you must check out this. It manages to combine Weird Al, Queen, and Lost. I think it's pretty old, since it seems to only reference Season 1 goings on, but it's still hilariously awesome. Really do check it out.

We lost one of our trashcans today. It was garbage day, so I took the two cans to the curb. Then, while I was at work, the wind ended up blowing one of them ....somewhere. Sad.

Oh! I know what I was going to remark on. Today is the 20th anniversary for my dad and my stepmom. I can't believe that they've been married for 2 decades! Holy crap, dude. Um. I guess I don't have anything to add about it beyond that. Just that it really does suck/amaze how quickly time goes by.
Posted by P@ at 9:53 PM No comments:

The following  are people I have seen on the buses of Las Vegas:

(note - links will not open to new windows)

The obvious conclusion to draw from this is that the Las Vegas bus systems are full of really attractive people.

Finally! Jeez, it took them forever to update their sign!

Okay, here's what we've got now:


and on the other side


CHRIST
IS RISEN
JUST AS HE SAID!


Erm. I'm no Bible expert, but did Christ actually say that he would "wise fwom his gwave"? (Hee! Bonus points if you get the reference)

But seriously. Did Jesus predict his resurrection, because I don't remember that part. If so, that's pretty darn neat.

I was going to make a big ol' post relating Jesus and Buffy (gist - was Jesus a vampire?) but I'm not big on the thinking front right now. I blame the time change.

I don't have anything to blog about right now, except that during the Simpsons tonight they announced that on July 27th, 2007

will be released to theaters.

We're debating whether we should go get in line now, or wait until next weekend.

I can drive for miles and miles