Last night I dreamt about Last Comic Standing. (I know, right? How boring am I?)

Anyway, the sad thing is that I can't remember the majority of the joke, so I'm hoping we can reverse engineer it. I recall the set-up, and the punchline, but I need the middle section.


The set-up is that "these" are the three most important questions in the world.

...which, really, isn't all that funny, but in the dream it certainly was. And, hey, maybe if I remembered what the first two questions were, it would be  (doubtful!), so, if you're feeling particularly comedic, have at it. What are the other 2 most important questions in the world?
Posted by P@ at 8:11 PM No comments:

Shave your face with some mace in the dark

I'd post a photo, but oddly, all the pictures (well, it's just the one so far) of me sans beard make me look older and aren't appealing, so for the sake of my vanity, none are available yet. Give me a day or three to get used to it (and take better pictures. Ha!).

Actually, here. I'll just put the picture up so that there's something else to this post, because as it is, it's somewhat boring, isn't it? 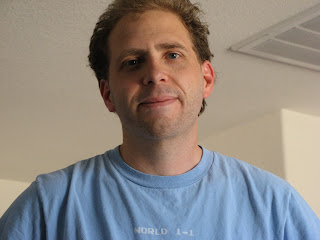 So it's Flag Day.

Last night I had a disturbing dream.
Keeping in mind that a) people's dreams are always less interesting to anyone hearing about them than the one who had them, and b) describing dreams usually takes much less time than the dream itself, here's what happened:

It was a post apocalyptic setting. The details of which were apparently not important enough for my brain to create, but I knew that a large percentage of the population had died off, fairly recently.

Survivors began to congregate, as they do in such tales.
I suggested that we go to the library to gather books on plumbing, gardening [real life intrusion!], and...I had some other topic that I thought was vital, but I forget now. But, you know, knowledge is power and all that, so that was the plan.

On the way to the libe, I picked up on some less than kind vibes coming from a young guy near the back of the group.

At one point he even told me, "You're going to die unexpectedly."

Well, that certainly increased the feeling of dread that was creeping over the dream.

Anyway. We get to the library, and we begin searching for books, splitting up to cover more ground quicker.

Naturally, I end up alone with Threat Guy, and two other people. Threat Guy (man, it would be nice if dream-people came pre-equiped with names, no?) removed a gun from his jacket, and I'm in full-on panic mode. But one of the other people in the room with us said, "Don't worry, Patrick. You don't die here."

Hearing this prophecy (I really don't know why, but that's the sense I got - what this guy said was actually preordained, and just...prophetic), anyway, hearing this prophecy instantly calmed me.
I was at complete and utter peace....and that's when Threat Guy shot me in the back of the head.

And then, at that exact instant, I woke up because Saren was screaming about a bug in her room.

It was 1am. Happy Birthday!!

The remainder of the day was surprisingly less dramatic.

At work I received Happy Birthday wishes from about 13 different people, with roughly 4 of them asking me why I didn't take the day off. Heh.
I also got free lunch (no such thing!), 4 bags of Skittles, a bag of barbecue potato chips, and a cupcake.

When I got home, I walked into the girls jumping out from various hiding places to wish me happy birthday, and homemade cards from them all. Not surprisingly, many of them were chinchilla related.

A few days ago, Steph said (paraphrasing): "I didn't say you'd get a chinchilla when you turn thirty-five. I said 'forty-five'."

(Reminder: Get this promise in writing.)

But, now Steph is making dinner - and a cake - and later I'm going to make good on my Birthday Resolution #2 (which is to start writing, daily, again). (Resolution #1 is to exercise daily. Completed!)

Labels: chinchilla, wanna see movies of my dreams, you're older than you've ever been 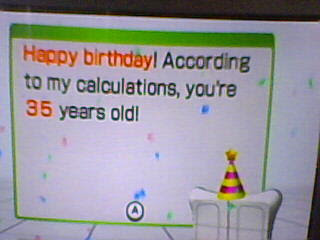 While removing a bunch of employees seems like a great way to save money (and, in fact, probably is, at least in the short term), keep in mind that the workers you have stick around are going to have their workload doubled (or sometimes tripled ...or more).

And while that might work out just fine for you - after all, you aren't doing any extra work, and you're saving lots of money since you aren't increasing the workers' pay - given enough time, your slaves are going to get worn out from all that extra labor.

And when people get tired, they make mistakes.

And mistakes? They tend to cost businesses money.

Sadly, I don't think this 'lesson' will be learned by anyone, really, because honestly, it's not like the workers have much say in the matter. I mean, what are they gonna do - starve?

So, despite the fact that working people to death is good for neither them nor, ultimately, you, the whole stupid game will keep on going until the earth tires of it all and hurls itself into the sun.
Posted by P@ at 8:42 PM 1 comment:

Haiku Review: Diary of the Dead