In honor of Dear Leader

Today is President's Day, which, according to some car commercial, is the day when we honor two of our greatest leaders. (Two out of 43, eh? I suppose those are pretty decent odds, considering.)

Anyway. In honor of this holiday (which I had to work, thank you very much), here are a few ways in which to celebrate:

Song lyric round up III

February 17th is the date where, for the past two years I have listed all the titles from my blog that have been song lyrics, and IDed them for anyone who happens to care.

Got to do it again, since it's a tradition now.

Only going forward from 2/18/05 through today, of course. If you want more, click on the links above. [lazy]

"Three... is a magic number." on May 20th, 2005 is from Three is a Magic Number by Schoolhouse Rock. (It was also covered by Blind Melon in an attempt to help Gen Xers cash in on nostalgia)

"Hi ho" on May 25th, 2005, is from Heigh Ho (Dwarfs' Digging and Marching Song) by the seven dwarfs, and which was in the movie Snow White and the Seven Dwarfs. (although I obviously can't spell.)

"What would you say, if I took those words away?" on September 7th, 2005, is from More Than Words by Extreme.

"Play the funky music, white boy!" on December 3rd, 2005, is from Play That Funky Music (White Boy) by Wild Cherry.

And that's it! Wow. Much less than previous years. I think...no, I know that part of the reason for that is because I've been self-conscious of the fact that on Feb. 17th I'd be making this list, so I've used less song lyrics than I normally would. I've said it before, I'll undoubtedly say it again, brains are weird.

Fair warning - I'm pretty tired. Not really at UTP@ lefel (or level, if you prefer) but almost. I'd get a Silver Medal if I were competeing (sp?) in the UTP@lympics.

ANyway. Miranda "tagged" me with this meme about a gabillion years ago, and so here I am. I was going to talk about Cell, since I finished it last night, but I'll wait until tomorrow to do that. Or maybe Steph will do it for me. Heh.

Four Jobs You Have Held

1. Taco Bell cashier. (And yet, I still eat there. Proof positive that I am, in fact, insane.)
2. The Noid. (Shut. Up.)
3. Master Control Operator (paid to watch tv all day! Cool! The catch? It was often crappy tv)
4. Programming Assistant (now I'm paid to pick the crappy tv that other people watch!)


Four Movies You Could Watch Over and Over


Four Places You Have Been on Vacation

I don't know that visit any site daily, since there are many days when (aside from work) I don't go online at all. That being said...
1. monkeyfilter.com
2. imdb.com
3. ranprieur.com
4. popcap.com (to play Psychobabble, which I have become readdicted to)


Four of Your Favorite Foods


Four Places You Would Rather Be Right Now


Four Cars You Have Owned

1. Cassie III (That was the Maroon Geo Metro that I made The Trip in. Also the only car I've ever named.)
2. A white '86 Nissan... something.
3. A black gas guzzling behemoth of a thing that ran like crap and that I ended up selling for 40 dollars. (Despite having paid nearly ten times that. And only owning it for a week or two. I'm not... what's the word? Thrifty.)
4. Um. Oh. Right. The Toyota.

Four Bloggers You Are Tagging
I couldn't choose so instead I will click the first four blogs from hitting "Next Blog" and pick them.

Labels: There is no you there is only meme, Who needs sleep?

GOD NEVER GAVE PARENTS THEIR CHILDREN TO KEEP THEM FROM CHURCH

2) Started watching Penn & Teller's Bullshit! today. Not sure how I feel about the program overall, but I think my title covers a lot of it. It's a three disc show, and we only have di'sc 1 right now. We will probably remove discs 2 & 3 from our queueue.

I was going to post stuff, then realized that i dob't have tuime, nor anything to say.

ANyway. We're getting ready t ogo get food. (Rufio's Ha Ha Grill, as because the Steph wants that)

Saren, and Harper and Irina and Steph all have varying degrees of sore ear infectionness. Not good.

Without being spoilery, here's what I think thus far:

Creepy, gory, goodness. Would make a pretty effective movie, if done right (which, since it's a Stephen King book, is debatable). Also - I told you [begin very vague spoilers for Cell - highlight to view] cell phones were evil[end spoiler]!
Posted by P@ at 4:33 PM 3 comments:

Um. I don't have naythng else to blgo about. Just want some sympathy for my poor departed little toe. God, who put that swingset in the middle of the room where I was walking? (Oh. Right. I did. But, jezusfuck am i in pain.)


It's times like this I wish I were a robot. Then I would laugh at my pain.
Except that I wouldn't laugh, since robots have no emotions. So maybe that wouldn't be such a good thing. Although I wouldn't have the pain, either. Hmmm. Also to consider - my robotic toe most likely would demolish anything that got in it's path.
Hmmm. Hmmmm, indeed.
Posted by P@ at 6:27 PM 4 comments:

We started the game during the Super Bowl pre-game show, because we are much more organized than the NFL is.

In a surprising move, Saren claimed she wanted to play as Good. Mwa-ha-ha-ing, I choose the Evil storyline by shuffling the evil tiles behind my back and selecting one. We wound up with the Judge.

Meanwhile, Good had Willow manage to get into the Initiative HQ and pick up the artifact. It was the Judge's Arm! It attacked her, and got in a good jab, but otherwise, the witch was unharmed. At the same time, [Not So](Useless)Xander managed to pick up the Living Flame card - the one that can destroy an artifact.

In between this, a few Super Bowl commercials happened, but this year's installments of adverts were pretty lame, and I'm not feeling very good, so I'm going to forego talking about them for now. I might get to them later. Maybe.

Spike saw that Xander and Willow were going to team up and destroy the Judge's Arm, and thus win the game, so he attempted to get to the Scoobies and stop them.

On, like, the fourth turn, Good used the Living Flame and destroyed the artifact card.

And the Super Bowl was only fifteen minutes into it.

So Saren asked if we should play again. (Read: "Do you want me to kick your butt one more time, Dad?")

I agreed. She said she wanted to be Evil this time. We did the shuffling thing again, and she wound up with Adam.

This game went longer, but since I wasn't feeling very good then either, a lot of the game is a blur. Highlights that I remember:

Oz only wolfed out once, and got a few good smacks on Adam, so I was feeling pretty confident at first. Then, he reverted back to human and never changed back through the rest of the game. He eventually was killed by Vamp X.

Willow was killed by Spike.

Spike was eventually killed by sunlight.

(Useless)Xander gave Buffy the Joyce Summers card, which restored her health five points, but even so, she was eventually destroyed by Adam near the Sunnydale University Library.

So. Two games of Buffy, and Saren won both of them.

Next year - assuming there is a next year (ha ha ha) - I'm going to take notes on both the game and the commercials.
Posted by P@ at 9:21 PM 6 comments:

Labels: everything's a game to you isn't it?, grr argh

Battle of the Century!

You've got about 20 hours left until Buffy Bowl III (or is it IV?) begins.

Taking bets on who will emerge victorious up until the game is over and I post about it.

So... who's gonna win this year - Good (Buffy, Oz, (Useless)Xander, and Willow) or Evil (um... I'm not sure which evil gang will be playing. Most likely The Mayor).

Not to sway any votes or anything, but keep in mind that it is Doom Thousand Six, so Evil has the Home Year Advantage.
Posted by P@ at 7:14 PM 3 comments:

Labels: everything's a game to you isn't it?

SERVICE IS NOT "SERVE US"

They've changed it again recently, but, guess what. I've forgotten it. Doh.
Posted by P@ at 6:00 PM No comments:

Not surprised that Punxatawney Phil saw his shadow this year. He sees it many times, and I figured that Doom Thousand Six would have as long a winter as possible.

Man, you ever have times when there are a gabillion things to talk about, but it feels like everyone else has said it all better?

It's the first day of Sweeps. Which means that tonight there will be the Television Event of the Century on EVERY channel! Yay.

OOhh! Speaking of the TEotC, Stupid Bowl Sunday is merely days away. Which means commercials! Disappointing, over-hyped, unfunny commercials!! But on the bright side, Saren and I will play our annual game of Buffy the vAmpire Slayer: The Game while it's on. Awesome.

The years fly by much too quickly. I remember catching her slimy, tiny, perfect little body so well. That it was already one year ago that that happened is difficult to really truly grasp.

Fun was had today, of course. Saren stayed home from school, because she has a bit of a cold. Irina also has a runny nose and sneezing, so she was not as happy as any of us would have liked, but with Steph's brothers and mother over, and Stephanie making a delicious dinner and cake, things were good. It's way late, and everyone else is already in bed, and these type of things are always better experienced than explained, so I will simply post a pic or two, and be done with it. 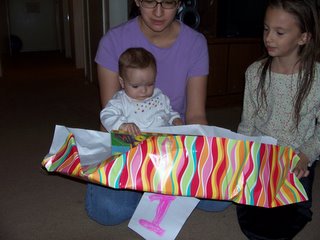 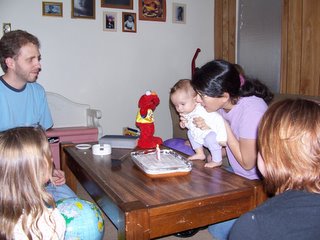 Labels: you're older than you've ever been
Newer Posts Older Posts Home
Subscribe to: Posts (Atom)